The Solar Storage Revolution has arrived in Australia and Solaray Energy is at the forefront of this exciting shift towards solar storage and energy management. Solar Battery Storage and Hybrid Solar are about storing power during the day to use in the evening. Unlike the expenses involved in going off-grid, solar + storage systems are about running your home off solar power as much as possible, and then automatically using the grid as a backup when needed.

Australian households are well suited for battery storage due to our high cost of electricity, low feed-in tariffs for solar power sold back to the grid, high penetration of solar power systems and a strong environmental movement away from coal and gas:

“I didn’t expect (demand) it to be as aggressive as it was,” Enphase Energy’s Asia Pacific head Nathan Dunn said in an interview with RenewEconomy in May. “I thought the numbers we had targeted would be an aggressive target, but demand is well above expectations.”

Approximately 80% of Enphase solar customers have expressed an interest in buying a power storage solution at some point in the future.

Primarily battery storage is about energy independence. It is a move away from a power grid that relies heavily on coal and gas, and it is a hedge against rising power prices. For many households with digital meters, tariffs between 2 pm and 8 pm are now up over 50 cents a kWh, and average electricity prices have risen more than 100% in Sydney between 2003 and 2013.

For many people, buying storage is a powerful vote for renewable energy. By leading this revolution, the early adopters of storage technology are growing a movement that is predicted to be a ‘multi-billion dollar industry by 2020. It is now evident that the renewable energy revolution will be powered by the people and this next phase of solar and storage uptake will be the most important yet.

Like so many Australians, Peter struggles to use all of his solar power in the home as it is generated during the day. Mr Thorne is an electrical engineer by trade and a director of Solaray Energy. Peter’s 5kW Solar System, powered by Enphase, generates most of its power when the family is at work, and so excess solar power is currently being fed out to the grid.

Peter said, “After installing the Enphase Storage System, to see my home now running almost entirely off solar power is a great feeling. I now see the power grid as nothing more than a backup, and that’s where I think we need to get to as a nation over the coming years.” 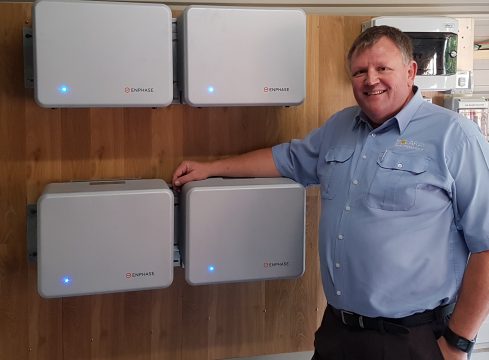 Peter sees battery storage as the future for solar power system owners. “Because my partner and I are both at work during the day, battery storage allows us to catch any excess power we would otherwise be reluctantly giving away to our energy retailer at 5 cents a kWh. We would much rather see this power stored in batteries so that we can further reduce our power bills by using it when we come home from work,” he said. “For me, battery storage is the future. I’m proud to be growing the renewable energy industry and doing my bit to reduce our reliance on fossil fuels – in particular coal and coal-seam gas.”

Battery storage will also benefit a number of households that have their solar bonus scheme finishing up on Dec 31st 2016. These Gross systems are feeding power directly to the grid and are getting paid up to 66 cents a kWh, so there is no emphasis on using solar power in the home across the day as it is generated. For households that are converting to a net system and are not home during the day, it will make sense to store this solar power to use it at night, rather than send it out to the grid to get paid a measly feed-in tariff of around 6 cents a kWh.

Battery Storage is about energy independence and doing your bit for Australia’s clean energy future. For those jumping in early, you can take pride in leading this revolution, and you can rest assured that you are buying the best technology available that is both future proof, updateable, expandable and most importantly it is safe. Battery storage is about taking power back from big business, it is about a greener future and yes, it is also about lower power bills.